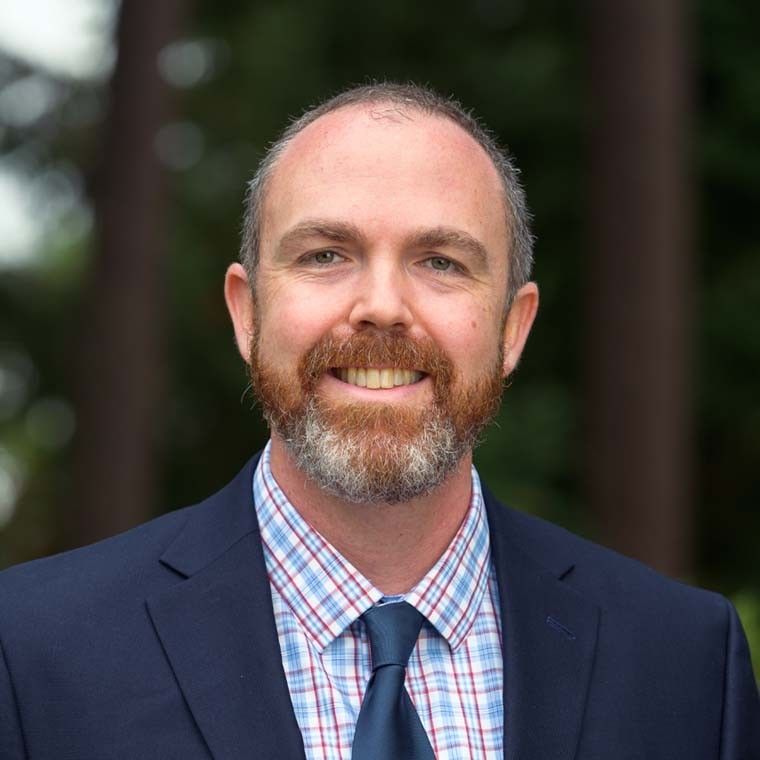 Dr. William Thompson teaches courses in European and World history. He grew up in Southern California, Massachusetts, and Portland, Oregon—and therefore lays claim to a wide variety of “home” sports teams. His interest in history began with a trip to the Boston Freedom Trail when he was five years old. He now enjoys taking his family along on research trips and offering unsolicited historical factoids to his wife and children during vacations.

His scholarly research focuses on local responses to religious change in Tudor England, using sixteenth-century churchwardens’ accounts to examine the implementation of iconoclastic religious policies under Henry VIII and Edward VI. These documents reveal the ethical dilemma faced by many Tudor parishioners between remaining faithful to their beliefs and obeying their king. Beyond his academic research, Dr. Thompson has a wide range of other historical interests, including film representations of World Wars I & II and the Cold War, the history of collecting and museums, the history of both the Olympic games and world soccer, and the ways that Disney theme parks draw on and represent the past in their attractions.

Believing that we learn best when we are at play, Dr. Thompson utilizes in-depth historical role-play simulations in many of his courses. He has written a simulation on the 1492 Papal Conclave that has been used at several colleges and universities. Dr. Thompson also teaches with strategy board games, analyzing them as popular conveyors of historical meaning and using them as pretext for creative research projects.

Dr. Thompson's goal is to teach students how to think historically about the world around them, recognizing that everything has a history and that everyone has a story to tell.

“Electing Alexander . . . or Not? The Development and Reception of a Reacting to the Past Role-Immersion Game Based on the Conclave of 1492.” In The Borgia Family: Rumor and Representation, edited by Jennifer Mara DeSilva, 86–104. New York: Routledge, 2019.

“Churchwardens in early Tudor England: On the Edge of Sacred and Secular.” Selected Proceedings from “On the Edge,” March 2015. The Reading Medievalist, vol. 3, edited by H. Mahood (University of Reading, UK, October 2016): 76–92.

“Conclave 1492: The Election of a Renaissance Pope.” Reacting to the Past, Level 2 Game. (RTTP Consortium Library, Aug 2017)

“Playing With the Past: Teaching Early Modern History through Role-Play Simulations and Board Games.” Sixteenth Century Society and Conference. October 2019.

“The Parish Church as Borderland: Re-Conceptualizing the Performance and Contestation of Religious Identity in Tudor England.” Sixteenth Century Society and Conference. October 2017.